A competitive season on League of Legends

With several thousands of daily viewer and the record of the most watched tournament of all times, League of Legends has without a doubt become a real phenomenon in esports, despite the fact that its game mechanics are sometimes hard to understand for the newcomers. Among the many fans that regulary go on Twitch to watch some live games, a large number has taken interest in the competitive scene and its many high-level tournaments. But here too, things are sometimes difficult to follow and understand. The yearly tournament system that Riot – the game developer – has implemented since 2011 to allow the best players and the best teams to face each other isn’t all that simple either.

So how does it work? What are the main tournaments of a season, and how do teams qualify for them? This new article – part of the series « A competitive season on » – should be able to help everyone get a better understanding of LoL’s scene, its challenges and its stakes.

League of Legends and its leagues

First of all, LoL’s competitive scene has one main characteristic: it is divided in several regional leagues that hold their own regional tournaments and championships. Those championships then give access to the two main international tournaments of the year, that gather teams from every leagues.
Most of the time, a league represents a region of the world or a country, and is created depending on the number of players in the region and the general level they play at. The more a league will be strong and consistent, the more advantages it will have over the others during tournaments and qualifiers. Here is the ranking of the fourteen current leagues:

One above all the others: the Korean League (KR).

Each league holds its own regional tournaments: some are on a national level, some are online qualifiers, and the most important ones are the regional championships – called Spring Split and Summer Split – that take place twice a year and lead to the two international tournaments of the season.

For those who are more curiouse, here are the names of each leagues’ regional championships. With these, you can look for more information and watch the tournaments you want to follow:

How do the Spring and Summer Splits work?

Before we start explaining anything, it is important to specify that each league has some particularities that the others don’t, be it name, dates, or number of stages of a tournament. To make it more simple, we will use the European model that represents the most common system. The Spring Split and the Summer Split are the main regional tournaments that take about half of the season. The Spring Split takes place from mid-January to mid-April, and the Summer Split from June to September. Each of these tournaments have an influence over the next ones, by giving out seeds for the Mid-Season Invitational (through the Spring Split ) and the World Championship (through the Summer Split). These regional tournaments include three different phases, called Promotion, Season and Playoffs, that we will explain in futher details below:

The Promotion stage is the first to take place, and gives a chance to teams from the lower division to reach the top of their leagues through national championships. The two finalists of this national stage – In Europe, the EUCS – win a spot for the Promotion stage where they will face the two teams that came in 9th and 10th position during the Season stage of the previous Split (for example, the last two teams of the Summer Split Season 2017 have been relegated to the Spring Split Promotion 2018). The two teams that manage to win these matches advance to the Season stage.

This stage is the first group stage of the tournament and gathers ten teams: two from Promotion, the six teams that reached the Playoffs of the previous Split, and the two teams that came in 7th and 8th position of the previous Season stage. From one Split to another, the raking of this stage becomes very important as it determines the placement for the Playoffs and for the next Split. The two best teams of Season advance directly to the semi-finals of the Playoffs, while the four following teams advance to quarterfinals. The next two teams in 7th and 8th positions stay for the next Split’s Season, while the last two teams fall back to Promotion.
Thus, six teams get to the last stage, the Playoffs, and qualify for the next Season at the same time.

After many twists and turns, the six best teams of the league face each other in the last stage to win the tournament and thus obtain a seed for the next international event: the winner of the Spring Split goes to the Mid-Season Invitational, and the winner of the Summer Split gets the best seed at the World Championship. During these Playoffs, the teams that came between the 3rd and 6th position of the Season stage face each other in quarterfinals, and the winners face the 1st and 2nd place in semi-finals. At the end, the grand winner obtains a comfortable position at the MSI or the World by advancing directly to the Main Event.

The tournament in the middle: the Mid-Season Invitational (MSI)

In May, all fourteen League of Legends leagues gather for the first time of the year during the Mid-Season Invitational. Fourteen teams, the best of each league, that qualified through their respective Spring Split.
This time, the tournament is divided into two stages: first, the Play-In, itself divided into two rounds. Then the Main Event, with another group stage and a final knockout stage. And there’s more! Thanks to the consistency and past results of their league, some of these teams gain an advatage over the others.
Sounds pretty complicated, doesn’t it?

Let’s start from the beginning: not all teams start from the same point. Among the premier leagues named a few paragraphs above, three or four of them have the opportunity to send their teams directly to the Main Event. To choose which ones will be favored, the organizers compare their results of the last two years and give the best seeds to the strongest and most consistent ones. If three leagues are clearly above the others, then three seeds are allocated. If four leagues are above the others, then four teams will directly go to the Main Event.

But that’s not all! As said before, the first stage of the Mid-Season Invitational, the Play-In, is made of two rounds. Why is that? Because here too, two teams have an advantage over the others: the weakest of the premier leagues (between Korea, Europe, North America, China, and Taiwan-Macao-Hong Kong) and the strongest of the secndary leagues (among the nine other leagues) start at Round 2. At Round 1, we have eight teams from the secondary leagues. The two winners of Round 1 then face the two other teams at Round 2, and the two winners of Round 2 advance to the Main Event.

What does it change for the next tournaments?

There is one exception in this system: since the beginning of League of Legends’ competitive scene, South Korea has always been the dominant region and has never left the top of the international ranking. With many victories at the most prestigious tournaments since 2011, organizers have gradually started considering that placing any team from South Korea in a group stage would be unfair competition. Hence, Korea sends its seeds #1 and #2 in Pool 1 one the Main Event, and seed #3 in Pool 2, so that no Korean team needs to go through the Play-In.

The final tournament: the World Championship

It is now time to talk about the most important tournament of the year – the World Championship – that takes place from September to November. This time, twenty-four teams are competing to win the grand title. While the overall system is similar to the Mid-Season Invitational, there are still some particularities that need to be explained.

In terms of structure, the World is also made of a Play-In in two rounds, and a Main Event in two stages. However, as explained above, this time the top leagues of the MSI have more than one team entering the tournament, while the remaining leagues only have one seed at the Play-In. At first, twelve teams face each other in the Play-In, and the four winners advance to the Main Event. There, twelve other teams are waiting for them: four seeds in Pool 1 and eight seeds in Pool 2.
During the group stage of the Main Event, the sixteen teams are split into four groups with one team from Pool 1 in each, so that the best teams are not to face each other at the beginning. At the outcome of this stage, eight teams qualify for the knockout stage and compete for the trophy – with no advantage whatsoever this time.

How do teams qualify for the World Championship?

Now that we know how many teams of each region are to participate in the tournament, let’s see how these teams are chosen. There are three ways to do so: seeds #1 are the winners or each league’s Summer Splits, that end shortly before the World Championship starts. That is how the teams of the secondary leagues reach the Play-In. For the top leagues with three seeds, seeds #2 are the teams with the most Championship Points – points collected depending on the teams’ results at the Spring and Summer Splits. The teams from the top leagues that gain the most points qualify for the World and enter Pool 2 of the Main Event. Last but not least, seeds #3 qualify through Regional Finals where the teams placed second to fifth position in the Championship Points ranking face each other one last time to obtain the last remaining spots at the Play-In.

League of Legends’ tournament system in one picture: 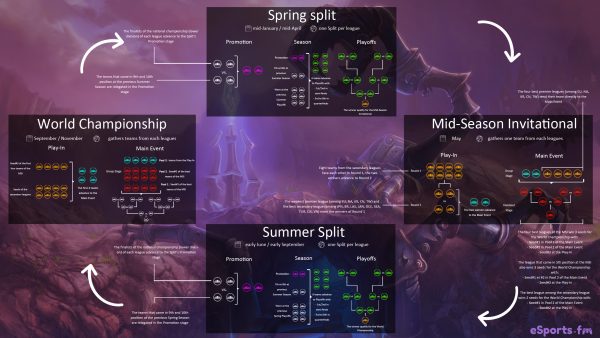 So, what do we watch?

From one year to another, the qualifying system, the number of teams participating and even the number of leagues change. With Vietnam becoming an independent league since early 2018, the whole organization of the World Championship could very well be altered and the seeds’ distribution could be different. But overall, we’ve given you a full summary of what happens during a season of League of Legends. In a year, you will be able to watch the Spring Split, then the Mid-Season Invitational, then the Summer Split, and close it with the very important World Championship. Obviously, there are many other tournaments on a national or regional level, but if you want to watch the best teams in the world, those tournaments are the one you should have a look into.

Main League of Legends tournaments of 2018: